The word ‘Yoga‘ is derived from the Sanskrit word ‘Yuj’, meaning ‘to join’ or ‘to yoke’ or ‘to unite’. As per Yogic scriptures the practice of Yoga leads to the union of individual consciousness with that of the Universal Consciousness, indicating a perfect harmony between the mind and body, Man & Nature. You can get motivated by the following Quotes on Yoga Day.

Yoga is a mental physical and spiritual practice originated in India. The united nation recognize its universal appear on 11th Dec 2014 and proclaimed 21stJune as international yoga day. So, The International Day of yoga has been celebrated annually on 21 June since 2015.

Here I am Sharing some Inspirational Yoga Quotes on Happiness for motivation for the youth of our nation as well as world. also describing how an individual stay happy by doing yoga. Yoga is not only necessary but also it should be part of our life. For our Indian people I am sharing some Yoga Quotes in Hindi language. You can share these Motivational Quotes with your friends and family member also through Facebook, WhatsApp, twitter, Instagram. sharing is caring . Thanks

Do yoga every day , ultimately you can get new idea and technique and trick abiout yoga

Yoga is a discipline

Age is not a matter of yoga

Everybody can enjoy the test of yoga

Yoga is the practice , jangya and mantras .

By doing regular yoga you can focus on your aim , objective and goals.

Yoga may be an alternative of medicine

Yoga may inspire you for achievement of your goals

Anyone can live happy with yoga

It may teach the moral responsibility

Yoga is the light of the world

You can motivated by doing yoga 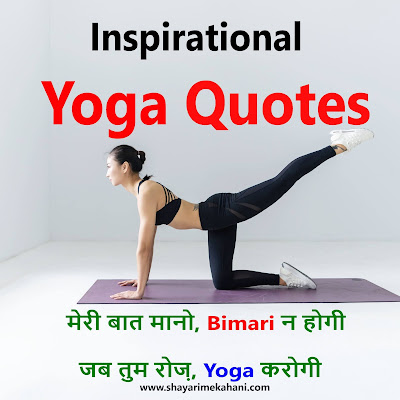